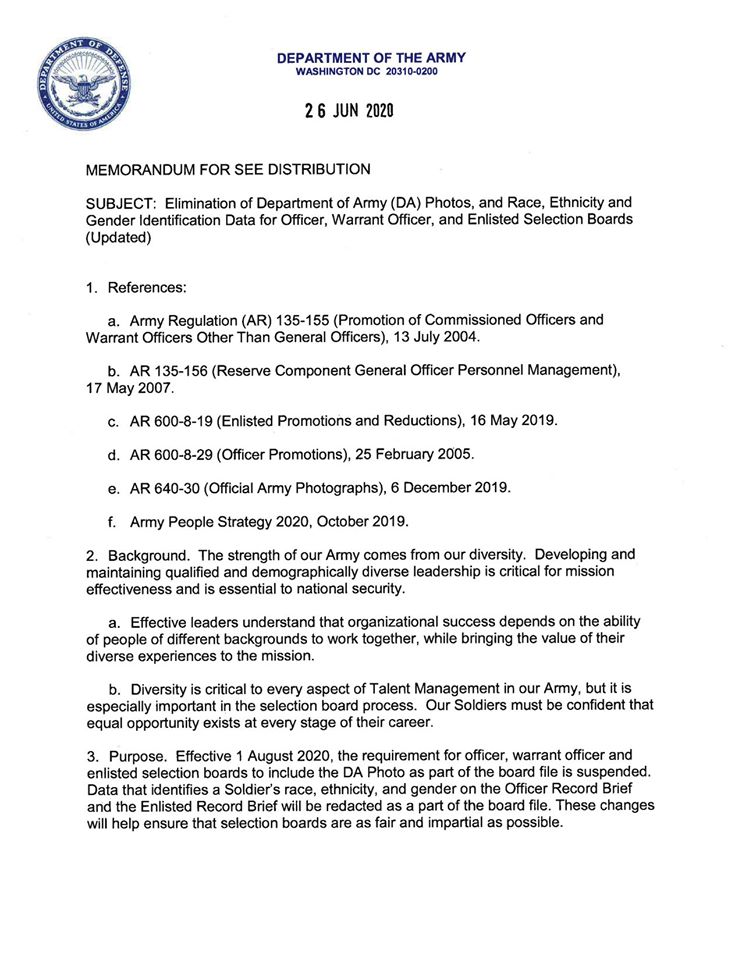 “Effective 1 August 2020, the requirement for officer, warrant officer and enlisted selection boards to include the DA Photo as part of the board file is suspended. Data that identifies a Soldier’s race, ethnicity, and gender on the Officer Record Brief and the Enlisted Record Brief will be redacted as a part of the board file. These changes will help ensure that selection boards are as fair and impartial as possible.”

The U.S. Army says its time to ditch photos in officer promotion board packages as a way guaranteeing a diverse racial aesthetic.

The move, which will go into effect Aug. 1, was confirmed by Military.com on Thursday and comes shortly after the creation of the “Defense Board on Diversity and Inclusion.”

“The strength of our Army comes from our diversity,” leaders wrote in a memo obtained by the defense website. “Developing and maintaining qualified and demographically diverse leadership is critical for mission effectiveness and is essential to national security.”

Earlier this week, the deputy commander of Army Training and Doctrine Command, Lt. Gen. Ted Martin, published an unofficial Twitter poll asking whether promotion board photos should be eliminated. More than 75% of the 3,255 respondents had voted in the affirmative as of Wednesday.

Army Reserve Maj. Gen. Tammy Smith, military assistant to the assistant secretary of the Army (Manpower and Reserve Affairs) for Quality of Life, tweeted, “Nothing in a photo reveals talent.”

Not all services use promotion photos, which are intended to show military bearing, fitness and attention to proper uniform wear. Neither the Coast Guard nor the Air Force include them as part of the promotion package. Those who oppose use of the photos argue that they favor white men and disadvantage anyone who looks different from the stereotypical image of a military leader.