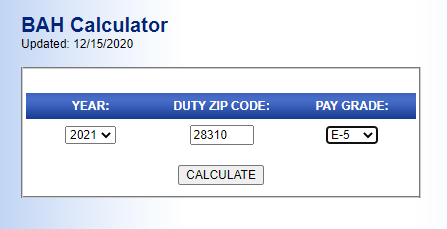 The Department of Defense released its 2021 Basic Allowance for Housing (BAH) rates.

BAH rates will increase an average of 2.9 percent when the new rates take effect on January 1, 2021.  An estimated $23 billion will be paid to approximately one million Service members.

BAH rates are based on local area rental market data and vary by geographic duty station, pay grade and dependency status. The cost of utilities is also considered.

BAH is based only on rental properties, not homeownership costs like mortgage payments and property taxes.

If BAH rates go up, the member will receive the higher BAH rate as long as eligibility is uninterrupted. This ensures members who have made long-term lease or contract commitments are not penalized if the area’s housing costs decrease.