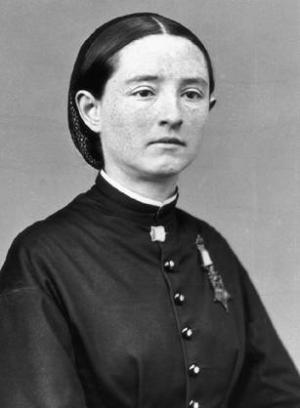 Born in 1832 near Oswego, NY, Dr. Mary E. Walker always stood out in a crowd. She was independent, had great energy, and always knew that she would be useful in the world. Graduating from Syracuse University in 1855, Dr. Walker became one of the few female physicians in the country, but she wanted to do more.

At the beginning of the Civil War in 1861, Dr. Walker (only 29 years old) moved to Washington D.C. and applied to become a surgeon with the Union Army, but unfortunately was rejected. Determined to assist she remained on as an unpaid volunteer serving as an assistant surgeon. During this time she played an instrumental role in establishing an organization that aided needy women who came to visit their wounded relatives.

Never giving up the fight to become an Army surgeon Dr. Walker relocated to Virginia in November of 1862 and was taken on by MG Ambrose Burnside as a volunteer field surgeon. By December of that year she was treating the wounded in both Warrenton and Fredericksburg still unpaid.

Almost a year later in Chattanooga, Dr. Walker tended to the casualties of the battle of Chickamauga. She again requested to be commissioned as an Army doctor after the completion of that battle. Finally, in September 1863 Dr. Walker was appointed by MG George H. Thomas to serve as an assistant surgeon in the Army of the Cumberland located with 52d Ohio Regiment. Unfortunately, Dr. Walker only served in this compacity for a short period, but, she became known for her bravery under fire during that time.

In April of 1864, Dr. Walker was captured by Confederate Troops and was held as a POW for four months. She suffered from abuse and spent time in various prisons until she was exchanged for a Confederate surgeon in August of 1864.

In October of that year Dr. Walker was granted a contract as an acting assistant surgeon and spent the rest of the war serving as superintendent at a Louisville, KY., female prison hospital and a Clarksville, TN., orphanage despite her requests to return to the battlefield.

The War is Over

At the end of the war Dr. Walker’s contract was released by the government and she lobbied for a brevet promotion to Major her services. Sadly, she was rejected once again and President Andrew Johnson asked for another way to recognize her service. A Medal of Honor was presented to Dr. Walker in January 1866. She wore it every day for the rest of her life.

After the war, Dr. Walker remained active in the women’s rights movement and crusaded against immorality, alcohol and tobacco and for clothing and election reform. One of her more unusual positions was that there was no need for a women’s suffrage act, as women already had the vote as American citizens.

In 1916, Congress revised the Medal of Honor standards to include only actual combat with an enemy. Several months later, in 1917, the Board of Medal Awards, after reviewing the merits of the awardees of the Civil War awards, ruled Dr. Walker’s medal, as well as those of 910 other recipients, as unwarranted and revoked.

She died on 21 February 1919 at the age of 86. However, Dr. Walker was not forgotten. Nearly 60 years after her death, at the urging of a descendent, the Army Board for Correction of Military Records reviewed the case. On 19 June 1977, Army Secretary Clifford L. Alexander approved the recommendation by the board to restore the Medal of Honor to Dr. Mary E. Walker. She remains the sole female recipient of the Medal of Honor.

Through her actions, Dr. Mary E. Walker set the standards for helping to improve soldiers’ quality of life for generations.

To honor Walker, the Dr. Mary E. Walker Award (DRMEW) was established in 1996. The DRMEW award is a means of recognizing Army spouses whose service merits special recognition of those who have contributed significantly to the quality of life for soldiers, exemplifying personal concern for the needs, training, development and welfare of soldiers and concern for families of soldiers.